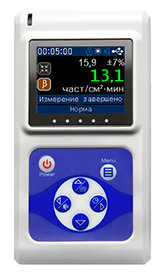 The main purpose of dosimeters RadiaScan is to alert the user to radiation hazard of surrounding areas, separate items and food, as well as the evaluation of the user’s ambient dose rate of gamma and X-rays.

In nature there are several types of ionizing radiation. Most often, people are exposed to photon (UV, X-ray, gamma), beta and alpha radiation. These radiations themselves differently effect on human body. Moreover, the particles may have different energies, what makes the result of such exposure even more diverse.

There is also a significant difference between the effects of external, towards the person, radiation sources and the sources located within the person. Radioactive materials, which enter human body with food and air, are many times more dangerous than the same radioactive materials that affect the human from outside.

External alpha particle, which occurred as a result of alpha decay and has enormous energy, is not able to penetrate deeper than epithelium, the outer dead layer of human skin. Entirely different situation is when alpha-source is inside the human body – in this case alpha particles will affect vital cells. One more factor that aggravates effect of the "internal" sources is their chemical properties. For example, radioactive iodine is mainly accumulated in the thyroid gland, replacing a non-radioactive chemical analogue. As a result, the damaging affection on the gland by this isotope is much higher than on the other organs of the body. Another spectacular example is strontium-90. By chemical properties, it is very similar to calcium, consequently first of all it affects the bones and bone marrow.

This difference between the effects of external and internal radiation sources leads to a various criteria of radiation hazard assessment on human body. For external radiation, it is generally enough to control the level of ambient dose intensity of photon radiation. Normal level of external radiation should be less than 0.3 mcSv/h, but there are some areas in the world where the natural background is several times higher than normal. For example, in case when measured natural background is 0.1 mcSv/h and the apple consistently shows 0.15 mcSv/h, you shouldn’t eat this apple in any case.

Summing up, dosimeter RadiaScan detects the level of ambient dose intensity of X-ray and gamma radiation and radiation hazard of separate items and food.

RadiaCode software is available on .