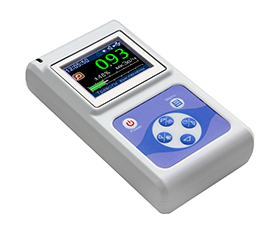 For what purposes this device is needed?

The device assesses the current value of the ambient dose and calculates the ambient dose of X-ray and gamma radiation. As well the device monitors the stability of the surrounding radiation environment. If the radiation level changes significantly, the device automatically starts new measurement. If the level is stable, the restart does not occur, and the statistical error is constantly decreasing. On the one hand, it allows the device to respond quickly to changes of radiation environment, on the other hand, provide values with a low level of statistical error.

If the measured values of radiation intensity and dose are above the threshold, the device provides alarm message and changes color of LED display and displayed values.

In this mode, all the measurements are performed using lead filter which is located on the cover of the device.

The search mode is aimed on search of radiation sources in the area. The device counts the number of pulses of the detector for a small fixed time intervals. In search mode results of the measurements have a higher statistical error but high reaction rate of the device on the changes of radiation level.

The device evaluates radiation intensity in two time intervals - a "short" (in the last second) and "long" (its duration is set by the user in settings). Both values are displayed as two strips of analog indicator. Two green outermost stripes show the value obtained for the "long" period of time, gray stripe in the middle - the value for the "short" interval. In case of approaching to radioactive source, the central stripe is getting mostly longer than the green outermost stripes and in case of estranging - shorter.

Alarm in this mode is not provided.

Screen of the mode of radiation level measurement near the item.

This mode is used to detect radioactive contamination of surfaces of items and food. Since radioactive materials that enters human body is much more dangerous than external sources, it becomes necessary to detect small deviations of radiation level near the item from the level of natural background. To obtain such deviations it’s needed to carry out longtime measurements (tens of minutes, hours).

The method consists in carrying out two measurements with low level of statistical error in the same place. In the first measurement the natural background level in absence of the item is defined. The second measurement is performed in the presence of the item with minimum possible distance between the detector and the item.

The device compares the results of both measurements and provides the conclusion on presence or absence of radioactive contamination of the item taking into account statistical error.

All measurements in this mode are performed at the removed cover of the device.

Screen of the mode of assessment of background gamma radiation impact.

Screen of the mode of measurement of total exposure of gamma and beta radiation that shows the calculated value of beta radiation.

The first measurement is performed with closed cover. The detector is closed by non-lead filter that impedes beta particles to penetrate the detector, but well-transmitting gamma radiation. As a result the level of accompanying gamma radiation is measured.

The second measurement is performed with the removed cover. As a result total value of gamma and beta radiation is measured.

By the difference of values of the second and the first measurements the device calculates the density of beta-particles.